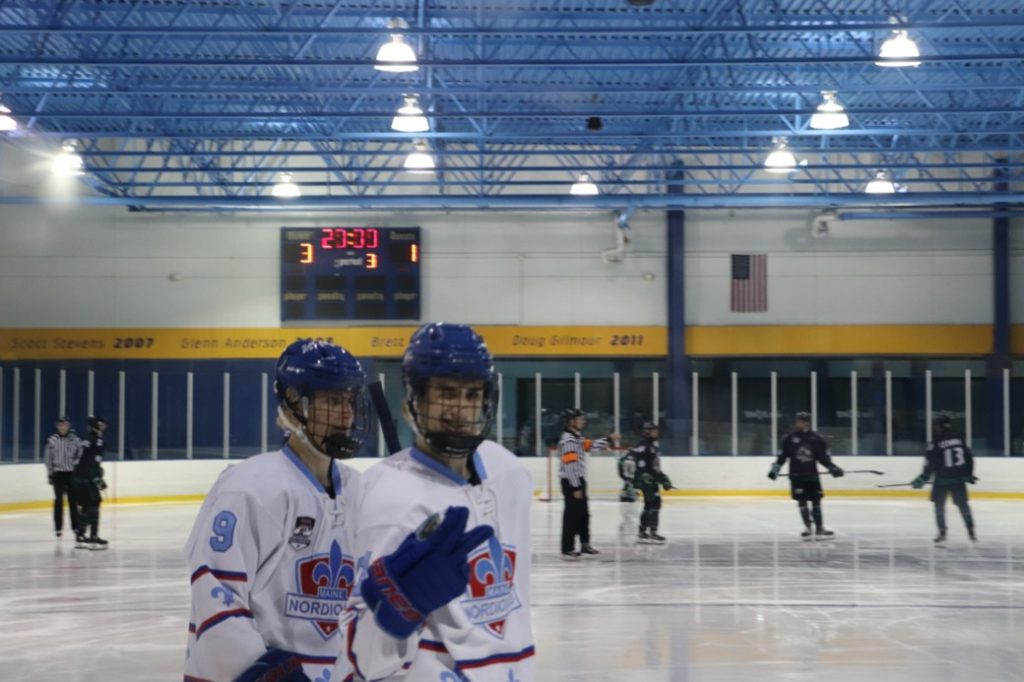 The Maine Nordiques Development Program’s second season is off to a decent start. Our 18U team boasts a 18-8-3 Record playing one of the 25 hardest schedules in the country. Our 16U team currently has a 15-12-2 record. Our pioneer MNDP players have also been doing some succeeding of their own. Ten players are still kicking at the Junior A Tier 2 or Tier 1 Level, excluding the USPHL’s “Tier 2” NCDC, where we have two players as well in that league who fell short of participating the NAHL through training camps and even playing some games. After ten weeks our Academy Alumni really caught fire this past weekend of November 12th-13th; adding 8 goals, 3 Assists, 2 Game Winning goals, and a 32 save performance in 11 games played and 1 game played in the net.

Clay Allen (Anchorage, Alaska): Clay who was a blue liner for our 18U team who went to Nationals posted 11G-26A in 41 games for the #6 ranked team last season. Clay Allen has had zero issues acclimating to the much higher level. This past week Clay was awarded an NAHL Star of the Week which would be the Academy Alumni’s first award for this season. His three goals and one assist would add to his total of 5G, 6A =11 Points in just 16 games a defenseman.

Aiden Westin (Anchorage, Alaska): Aiden did not play this weekend due to injury. Aiden has been ripping up the NAHL’s most western division with six goals and six assists so far in 16 games. Last season, Westy earned 13G, 20A =33 points in just 24 games for our 18U Nords team.

Justin Mexico (Madison Heights, Michigan): Justin had a solid weekend as well. A great performance for Todd Sanden’s North Iowa Bulls. Justin added the first Bulls goal of the game on a breakaway and then added a shootout tally which overall would help the Bulls earn the win. The two way center has had 2 goals, 3 assists for a total of 5 points in 16 games. Justin led the Maine Nordiques 18’s in points per game last season with 67 points in 39 games for the Maine Nordiques inaugural academy season.

Anthony Galante (Marlboro, New Jersey): “G” is sorely missed on and off the ice. A tough start earning a spot in the lineup with his original squad , Coach Steve Jennings in Aberdeen was quick to scoop G up. Since his arrival in Aberdeen, Anthony has played four consecutive games and scored his first goal proving to be a game winning goal in his third game with the Wings. Galante now has 2 Goals, 1 Assist in 11 games this season.

Kadsen Johnson (West Newton, Pennsylvania): Kadsen who is a Maine Nordique/ISS Kings lifer has added 1 goal and 4 assists in his first 18 games this season with the NAHL Maine Nordiques. Kadsen has dressed in every game for the Nords this season which is an impressive task for the rookie blue liner.

Jack Kurrle ( Montpelier, Vermont): The UVM Commit just ripped home not just his first goal (the game winner nonetheless) of the season in Saturday’s home win vs eastern division leader the Maryland Black Bears but also added the insurance marker. Jack now has two goals on the year while also adding 1 assist in his first 12 games.

Kris Zapata (Vorhees, New Jersey): The speedster not known for his scoring has done a tremendous job keeping the energy up for his teammates. His 1 assist in 11 games does not go unnoticed. Last season, Kris tallied 12 goals and 18 assists in 48 games for the Nordiques 18’s.

Zion Green (Birmingham, Michigan): The youngest player on the current Maine Nordiques North American League roster, the Northern Michigan commit has had a terrific start coming from our youngest team in house from last season. Zion has accumulated a very impressive 6 goals, 5 assists in 16 Games for the Nords.

Ansel “Gus” Holt (Toledo, Ohio): The Army West Point commit holds a 3-4-1 record in his first 8 starts for the Nordiques. Coming off a 30-11-1 season backstopping our 18’s to nationals Gus currently holds a 91.5 sv% and averages 3.22 goals against, as a rookie goalie in the North American Hockey League.

Easton Zueger (Sioux Falls, South Dakota): The team captain and ultimate leader on and off the ice for the MNDP in the 20-21 season has started the year as an undrafted free agent for the same team he used to stick boy for as a young hockey lover, the USHL’s Sioux Falls Stampede. There have been no points scored yet for Easton in his seven games but the story of him achieving his dream to suit up for the Stampede has been incredibly fun to follow so far this fall. Easton Zueger still looks for his first point in the Nation’s best league but brings our total to 135 games played at the tier 1 or 2 Junior A level from last years Maine Nordiques Development Program’s best.

Miles Harrington (McDonough, GA): Our Team Captain from last season’s 18’s team had a great weekend against his former program back in Early October. We had a lot of fun watching the good guys beat Danbury in a 2-0 sweep, but we had a ton of fun watching Miles do everything in his power to help Danbury to a win; to this point Miles has 4G, 1A in 17 games

To date the eleven players from our midget program have done a decent job at the next level. In 120 games they have scored 51 points in the NAHL totaling 128 games played including the 8 in the net.