Maine Nordiques 16s off to Minnesota before the Thanksgiving Break 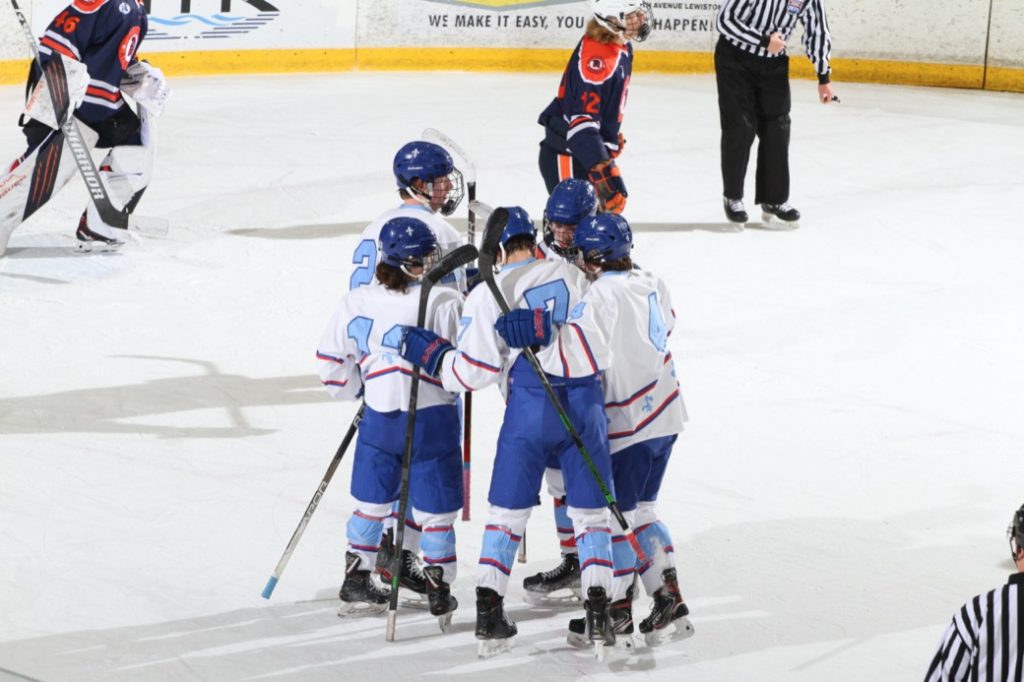 The Maine Nordiques 16U team flew out to Alexandria, MN for a showcase hosted by NorthStar Christian Academy. The facility all the games were played in was in mint condition and everything ran smoothly from Friday to Sunday. The Nords had a very competitive schedule ahead of them for the weekend. Friday, November 19th, the Nordiques were set to play against the NE Wisconsin Gamblers, formally known as the Green Bay Jr. Gamblers. It was a shaky game from merely start to finish, however, that did not deter the boys from putting up a solid effort. Unfortunately, the Nords did not come away with the win, despite putting up a five spot. Maine gave up two quick goals to start the game but continuously found a way to bounce back. Trace Day stepped up and answered with two goals in one shift to tie up the game. Both goals underneath the bar, adding to his point and goal leads for the team. The Gamblers scored twice again, before defenseman, Cooke Evans, put home a buzzer beater at the end of the first. The second period saw Owen Trevino snap one home on a beautiful feed from Trace Day, his fourth point on the day. Tie game. Later in the second, Evans, clapped one home putting the Nords up one. The first lead of the day was short lived, as the Gamblers tied the game before the end of the second period. The high scoring affair was heading into the third period all square at 5 apiece. The Gamblers reaped the benefit of a fortuitous bounce in the third period. A Gambler player drove wide and blindly threw the puck banking off a Nordiques skate and into the back of the net. The Nords fought hard but were unable to put one past the Gamblers goaltender, opening the showcase with a 6-5 loss.

The following day the Nordiques were matched up against a fast and skilled Sioux Falls Power team. It was an exciting first period where the Nords were playing some of their best hockey all weekend. Trace Day scored on a breakaway midway through the first. It was a silky move and a great pass from defenseman Ben Moll. The Power scored late on a powerplay breakdown by the Nords. Vlad Bryzgalov was tested frequently throughout the first period and stood his ground. A common theme for the Nordiques over the weekend was undisciplined penalties, which came back to bite them. The Power took the lead on a powerplay, 2-1. Another common theme over the weekend was Trace Day scoring goals. He banged home a rebound to tie things up heading into the third period. It was an exciting game and the Nords were hopeful to steal a win against the top 25 ranked opponent. Penalty trouble, the Achilles heel of the Nordiques, spoiled the tie game in the third period. The Power would go up 3-2 and that was all they needed. The Nords were given a late powerplay opportunity in the third period but came up empty handed; the Power added salt to the Nordiques wound by adding a fourth goal with seconds to go in the game. A lot of positives for the Nordiques to ride as they would face the host team on Sunday. Sunday saw the Nordiques faceoff against the solid NorthStar Christian Academy Knights. The coaching staff, Laskero and Davidson prepared the group for battle.

“We knew this team would come out relentless and hungry, and our guys would need to weather the storm properly if they didn’t want to go down early” – Joe Laskero.

The group came out flat and ended up giving up two quick goals in the first five minutes of the period. The Nords started to pick up their pace of play throughout the first, scoring opportunities coming more frequently. The Knights took a 3-0 lead after a point shot was deflected in front of the net, the Nordiques argued that it was a high stick, however, failed in their pursuit to have goal overturned. Determined to get on the board, the Nords found themselves with a powerplay opportunity. Evans was rewarded for his strong play over the weekend and slotted in on the first powerplay unit, it paid off as he slid one to nonother than, Trace Day, who sniped one top right corner to make the game 3-1. Day’s fifth goal in three games. The game from then on out was a battle, goalie Jabe Breitzke played exceptional, holding the Nordiques within 2 goals for the rest of the game. Tempers flared as a scrum ensued, seeing players from both sides be ejected from the game. The Knights scored on an empty net with 3 seconds to go in the game. Coach Laskero and Davidson were pleased with the effort from the boys throughout the showcase. The team focused on three key words over the weekend, discipline, support, and energy. All aspects need work for the Nordiques to get back on track. Some high points over the weekend were seeing Trace Day go off on an offensive explosion, putting up 7 points in his three games; Cooke Evans, doubled his goal total on the year; and lastly, newcomer, Connor Corcoran, showed his teammates how much heart he has, he must have averaged 10 blocked shots a game over the weekend, sacrificing his body all over the ice.