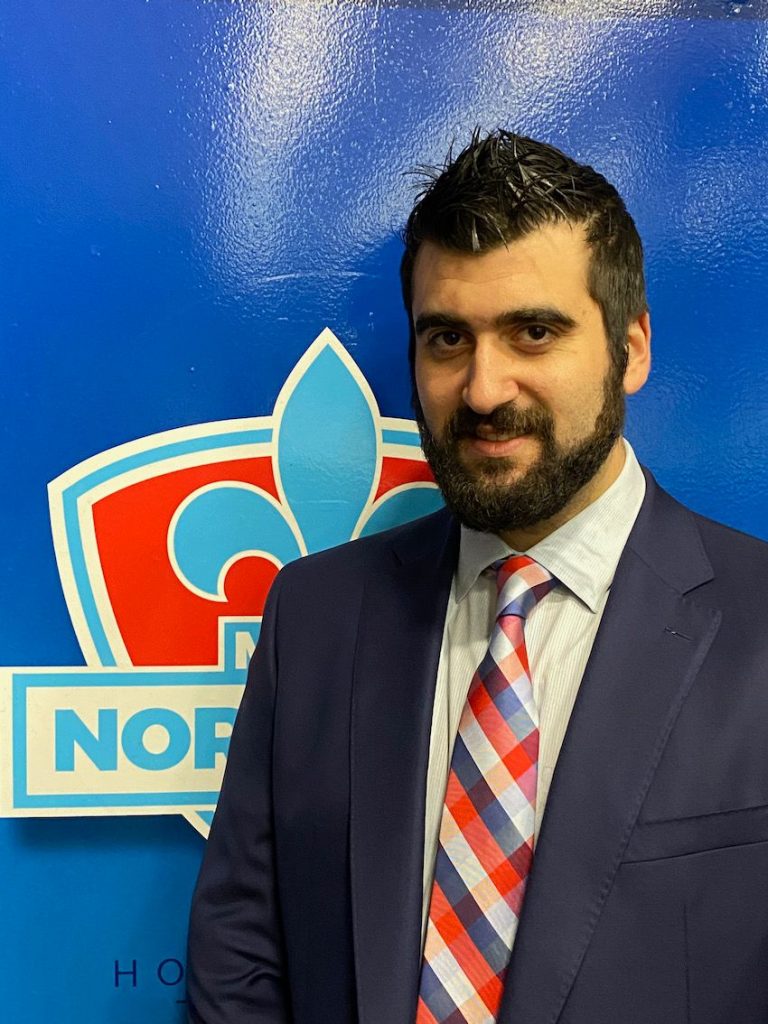 Nick enters the 22-23 season as our veteran U18 Coach.  Prior to his first two years with us, he spent two seasons at U18 with much success at our NAHL East Rival, The New Jersey Titans affiliate team, with 81-29-5 record.  In those two seasons, his players earned a total of 40 games of call ups, 12 advancements into the USHL or NAHL, top 20 finishes, and an Atlantic District Finalist (Covid-19 DNP Final).   In 2020-2022 as the Maine Nordiques academy’s affiliate team Head Coach, Nick brought the Nordiques a top 10 team ranking each year.  Most importantly is his academy players developed and advanced.  (see Where Are They Now).

Under Nick, the MNDP 18U and 16U alumni advanced with: 20 NAHL tenders, 4 USHL player advancements, and 4 division 1 commits during the last two years.

Before coming to Maine, Nick also worked with The Amarillo Bulls scouting staff for four seasons: earning a position with them in his junior season, playing for NCAA Division III program Lebanon Valley College, under Head Coach Don Parsons. While on the Amarillo staff, The Bulls saw three playoff appearances and one Robertson Cup appearance under Head Coach, Rocky Russo, who coached Nick in his final Junior Hockey season.

One of Nick’s primary focuses during the Academy year is player advancement.  His results speak for themselves and he focuses on developing Tier 1 caliber player habits that enhance a winning culture at any level or life setting.   Six players followed him from New Jersey for Maine’s inaugural academy season in 2020-2021 where the team saw a (40-11-2) record, 20+ games of NAHL call-ups, a Nationally ranked 6th place finish, a 14-game winning streak, and a USA Hockey Nationals Invite.  By 2022, another top 10 year, we had 4 NCAA Div 1 commits, 4 USHL advancements, and over 20 NAHL advancements from players attending our academy.

Nick’s coaching style is not for everyone.  If you are a Tier 1 caliber player with high aspirations, there’s a good chance he is though.  Here is a sampling of some recent testimonials:

“I have been a police officer for 23 years in Middletown, NJ. [and] I consider myself a pretty good judge of character. This is our third year with Coach Nick and second with the Maine Nordiques and wouldn’t change a thing.  I can say with certainty that his heart is 100% into those kids and team. The guy eats, sleeps and breathes hockey. He is dedicated, committed and determined to do what’s best for the program with his best intentions.

What Coach Nick has done for the players, team and program these past two years are nothing short of outstanding. There are countless past and present players that will do anything for Coach Nick, my kid included.  In only the second year of this program. Coach Nick, again, has a top 10 team in the country and an outstanding opportunity to attend Nationals for the second year in a row.”

“Z. has had a wonderful year and shown tremendous development both on the ice and off because of the leadership of Coach Skerlick. Z. would not be on the track he currently is under any other coach in my opinion. My husband and I trust Nick completely to handle Z. daily, take care of him, and ensure he remains on track to meet his goals in hockey. At the Nordiques organization, Z. has said every day how much he loves it there, and how much he loves Coach Skerlick.  Overall, I could not think of a better organization for my son to play at. We have been a part of USA hockey for 15 years between my two children and have seen both good and bad coaches, good and bad organizations. The Nordiques are a great organization that care about the players and the families that support those players.

Coach Skerlick and the entire coaching staff has been extremely supportive and helpful throughout the year.”

“Nick Skerlick is the reason why my son A. came back to 18U Maine Nordiques for 2021-2022. When we questioned A. about going back to Maine, he stated that he had learned more about the game of hockey and what is necessary to make it to the next level during his time with Nick, than he had in his prior ten (10) years.

We believe Nick is a pretty good judge of talent and has what it takes to develop successful young men. It was evident in the 2020-2021 season with not only the success of the overall [year] but by the number of commitments that the team received for players to go to the next level. The same thing is happening again. He has been able to get 25 players to bond and buy into a system and be successful at it. Not just one [year] but two in row.”

“I would like to say that my son R.  has been playing hockey since he is 4 years old and of all the coaches that have spent time on the ice with my son, by far Nick Skerlick in one of the best. Not only is Nick a great coach on and off the ice but he genuinely cares about his players. There is not one coach in youth hockey that can motivate my son like Nick Skerlick. Nick is tough but he gets 120% from [my son].  R.  can have the worst day on the ice, worst shift or worst game but with Nick he will learn and become a stronger player for it. R.  had more ice time, more PP minutes on Little Flyers, but R.  is a better hockey player under Nick and that means everything! No matter how hard Nick can be, my son absolutely loves and respects Nick. If you know R., he is a sensitive kid (to a fault) and he has never complained to me once about Nick’s coaching.   R.  went to the Little Flyers after last year because of financial reasons and not one single day of the entire season went by that R.  did not text me and tell me he missed Nick’s coaching.”

“We were abruptly forced to change gears at the beginning of [2021-2022] season when we ended up moving to Danbury to continue [my son’s] NAHL endeavors [having advanced from the Nordiques].  Either way, he grew, matured and truly found a ‘second family’ with the Nordiques in his year there.  This was in large part a result of Nick Skerlick’s leadership and mentorship.  As you may know, [my son] started playing for Nick in NJ with the Titans and had multiple offers/opportunities to finish 18U.  He (and we) chose to send him to Maine, despite the fact that we received less financial relief than we were offered elsewhere.  Miles followed Nick to Maine because of his transparency, honesty, humility and unbelievable coaching acumen.”