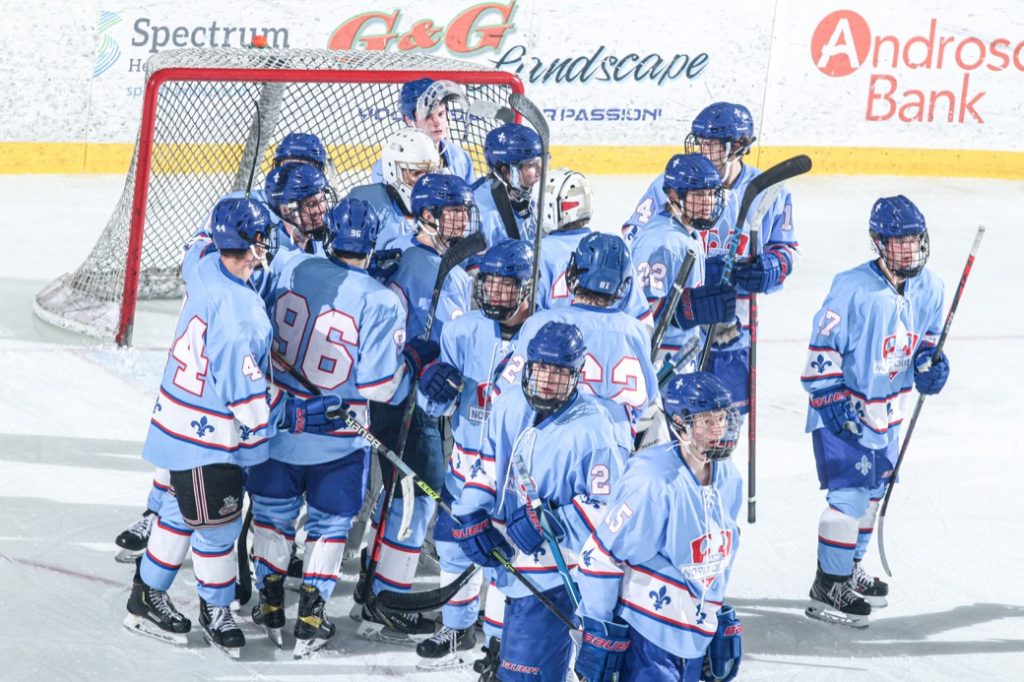 The 18’s traveled down to providence Rhode Island to play in the event they all long awaited for. The inaugural “OverSpeed Holiday Classic” took place December 10-12th and welcomed six teams from all over the country for a competitive weekend of play. The Nords opened with the Colorado Rampage in game one at the beautiful Schneider Arena. They would score their first goal after 21 days off very early into the frame from a set place off which Will Ralsten would tip in his fourth of the year. The assist was awarded to Ivan Roudakov who had a great weekend! After the goal the Nords struggled to settle down pucks and this would result in giving up their only goal of round robin play while on the powerplay. Thomas Kiesewetter would get beat on the breakaway but would stop the other 26 shots he saw. Ryan Panico would answer on another structural tic-tac-toe play straight from a practice plan minutes later. A dandy puck moving goal with assists to Jack Wineman and Peyton Van Buskirk led the Nords to a calm approach in the dressing room at the break. A third period of domination ensued where the Nords would strike on yet another face-off play from the same circle they scored from previously. It would be hard working, Brendan Waivada, with the snipe straight down the middle lane with great efforts from center Zach Herman and Zach Sedlacek off the face off. The Nords final tally came from point leader Jackson Truchan burying a rebound off a Ryan Panico Shot. Ivan Roudakov capped off a stellar 2 assist effort on the goal and added to his impressive +16 tally. 4-1 Final, Nords

The next day a very good team effort and will to win showed a 51-minute effort that the Nords have been looking for. A late first period tally from new forward, Grant Dietz, stunned the heavily favorited Ohio Blue Jackets. Another tip into the cage got the scoring going two games in a row, from a simple soft shot from Anthony Marra. Brendan Waivada added another point to his weekend with an assist. A 1-0 lead would hold into the break after the Nords dominated the second period in shots (17-4). Ivan Roudakov was quick to bury into the start of the third with a seeing eye wrister that beat the Blue Jacket goal tender low glove side. Connor Miller and Jackson Truchan would get on the sheet for their first time of the contest on the final goal. From there, USHL experienced goaltender Ewan McDevitt would hold strong stopping all 21 shots in the game. 2-0 Final, Nords.

Four hours later the Nords would pitch another shutout in front of Alberta native Ashton Billesberger. “Billy” would hold on to all 22 shots he saw in the game. Jack Wineman would get the scoring going halfway into the first after a short breakaway allowed him to slide one in on the backhand. Jon Meijer would register his first assist of the year. Moments later Ryan Panico would take the team lead in goals getting one off his leg (16th) into the net after Alexei Yarmulnik deflected an Owen Benoit shot the leading goal scorer. The Nords were not done and took a three-goal lead on their first power play goal of the weekend halfway into the second. Jackson Truchan would add his 16th of the year from Alaskan native Peyton VanBuskirk. Anthony Marra would grab is second assist of the game as well. This goal forced a tie in team leading goals scored at 16. Ryan Panico would not remain tied for long with Truchan as he sniped a forced turnover high blocker side. The goal would be unassisted and the Nords would hold a four-goal lead and finish pool play 3-0 scoring 10 goals and giving up 1. Sunday’s championship game vs #2 Mount Saint Charles did not disappoint. 4-0 Final, Nords

Mount coming off four very good efforts including a 9-0 beating to top 10, Culver Academy, did not put any concern into the Nordiques as they got on the board first. Zach Sedlacek would be the goal scorer and Brendan Waivada added yet another point chipping it to Herman for a 2 on 1 with Sedlacek. The Nordiques scheduled starter was pulled from the game minutes later after he surrendered a 2 on 1 goal himself and could not continue with an ankle injury. Mount would take the next twenty minutes of play where they added another goal before the first period was over. Replacement, Thomas Kiesewetter, held strong and allowed the Nords to work through their worst performance of the weekend where the good guys would score two goals in three minutes. The first goal scored by Connor Miller with a redirect off his foot developed off another forced turnover by Panico on the patient fore check. He would rip one across to Truchan who banked it off Miller into the net. Minutes later Grant Dietz and Brendan Waivada went to work below the MSC goal line. Dietz would come out of the pile and sneak one under the Mount goalie on the wrap around with three seconds remaining. Waivada registered another point on the weekend. For the second time in 28 days the Nordiques had #2 Mount Saint Charles by a goal heading into the last frame. Mount would be awarded the first power play of the game with a questionable call at the beginning of the third. Mount banged it home and then took the lead with 7:54 left in the third period. With under two minutes remaining, Jackson Truchan, ran a perfect zone entry sliding a pass to Zach Herman who sniped a jaw dropper that stunned the arena. The game was tied. Roudakov added his defensive-core leading 15th assist on the breakout pass. OVERTIME this time around as the Nords held Mount to a tie the previous contest. The Nordiques would fall to arguably the best team in the country as one of their several Division 1 commits caught the good guys sleeping in the 3v3 OT. 4-5 Final, Mount Saint Charles

The weekend was over and the Nordiques would fall in another close championship game to Mount Saint Charles for the second time in seven months.

“Frustrating, but you know what, what an awesome game! I can’t begin to tell you how much it means to our staff knowing that team we lost too is the benchmark in our recruiting all summer and we strive to compete with them. We have done just that in our last five contests with them. We blew three leads to them in those five games and have tied three of those games. The two regulation losses were one goal losses ( not including one empty net) in the NE Regional final of 2021. If we can continue to play like this the climb is on to try to WILL our way into the discussion for at Large selections from the USA Hockey Competition Committee. Efforts from Waivada, Herman, Roudakov and the goal tending did not go unnoticed in weekends like this. Secondary scoring is a must down the road here and I appreciate those efforts from that group and really everyone this weekend.”- Nick Skerlick

The Nordiques do not have an easy weekend ahead and take on powerhouse NorthStar Christian Academy out in Blaine, MN followed by a second game in the same day against a very physical Biggby Coffee out of Michigan. The games will be broadcasted starting Saturday on HockeyTv.