16U Plays in NAPHL Tournament Hosted by NJ Titans 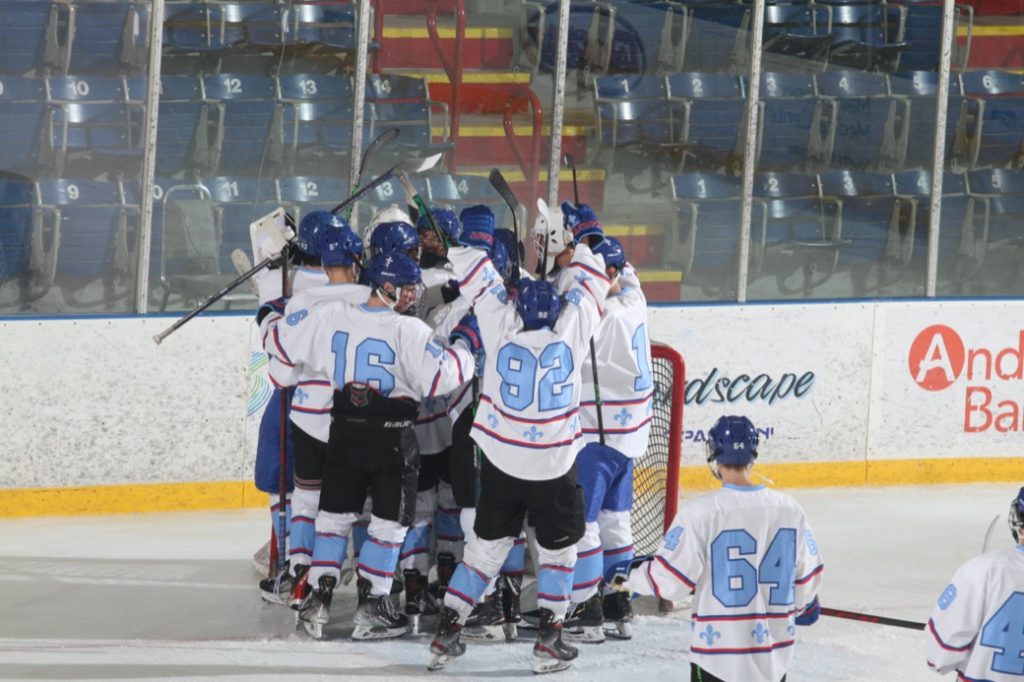 The Maine Nordiques 16U had a hefty weekend of games in front of them starting on Thursday and ending on Sunday. As the team rounded up in the vans to head down to Exeter, New Hampshire to play against the #38 team in the country, Seacoast Performance Academy, Thursday late afternoon. The previous game against SPA got very chippy with some big hits and lots of chirps towards the end of the game, which rode the coat tails to this game as it started with some fire. Bodies were being thrown all over the ice from start to finish. As the game progressed the Nords were able to strike first with a goal by Alexander Suvorov by tipping a great point shot from Cooke Evans; also assisted by Trace Day who started the play. Unfortunately, that was the last goal that was put in by the Nords as SPA would come back with 4 unanswered goals as some poor defensive play and untimely penalties hurt the Nords. Jabe Breitzke made 24 saves in the game as the final score ended at 4-1.

The Nords now loaded up the vans again and headed down to Middletown, New Jersey for the NAPHL showcase, hosted by the New Jersey Titans. The Maine Nordiques will look to rebound against the Mercer Chiefs on Friday. After traveling the day before the boys seemed to come out a little flat and gave up a goal two minutes into the first period as the puck took a bad hop over Bradley’s stick that led to a breakaway. As the play started to pick up throughout the first half of the game the Nordiques had a beautiful passing play between Charron, Day, and Cooke that led to a snipe by #4 Cam Charron. Power-plays were being exchanged on both sides of the ice; unfortunately the Nords were on the wrong side of some calls. The Chiefs were able to capitalize on two man- advantage opportunities making the score 3-1 before the second period ended. The new pick-up, Will Marcotte, was able to make a name for himself by sending one shortly after the Chiefs scored their second power-play goal to make the score 3-2. His goal was assisted by Day and Bahnik. More power-plays were being exchanged and the Nords found themselves with the advantage and were finally able to capitalize with a goal by Trevino, assisted from Day and Bradley. The Nords were able to rattled off two quick ones within 30 seconds of each other to make the score 4-3 with the help of Brody Hernandez, a great off-hand one timer assisted by Cooke and Charron. But, as history repeats itself the Nords were unable to hold the lead as they gave up 3 unanswered goals this time with a final score of 6-4.

Saturday in Middletown, New Jersey the Nords were slated for two games one versus the Philadelphia Little Flyers and the East Coast Spartans. The boys were determined for a much better outcome throughout these two games and it showed. Ben Lees started to turn his game up with a snipe from point blank in his first shift of the game, assisted by Marcotte and Warshaw. 1-0 Nords. The game continued to be some great back and forth action as the score was held to 1-0; until the Flyers started to get into penalty trouble. This led to a lethal Nords power play and a shot was taken by Ryan Bradley; a little trickler passed the glove side went in, assisted by Charron and day. 2-0 Nords. The Flyers were able to strike shortly after the Nords goal, as a costly turnover created a great scoring chance that goalie Vladislav Bryzgalov could not manage to stop. 2-1 Nords. Even after the heavy pressure from the Flyers towards the end of the game the Nordiques were able to fend them off with some great defensive play and some stellar goaltending as the score ended 3-1, Nordiques Win! Bryzgalov made 27 saves in the game.

Later that day the boys were set to play against the East Coast Spartans. They were starting to click on all cylinders throughout this game as they got better and better from start to finish. 1st period ended 1-0 Nords, with a tally from Cooke by Kenney and Warshaw. Some unorthodox play was going on by the Spartans as they were hanging one guy back in the Neutral zone throughout the entire game but the Nords were able to alleviate that strategy with great offensive zone pressure. As the game rolled on, lots of power-plays were handed out on both sides as the Spartans tied it up 1-1 from a bad angle shot. That was the last goal that MJ Vrabel let in. The Nordiques turned on the jets after this by scoring seven unanswered goals by the likes of Lees (2), Trevino (2), Day, Bahnik, and Kenney. Final score 8-1 Nords win! MJ Vrabel with 16 saves on the night.

The last and final game of the weekend, The New Jersey Titans, Coach Skerlick’s former team. It was an emotional and the most fast-paced game of the five from the weekend. It was one of the most exciting games for the 16U Nordiques team as play was up and down the entire game with man-advantages being handed out pretty fairly for both sides as well. Neither team was able to strike on them though as both goalies were standing on their heads. Throughout the game the coaching staff kept emphasizing that the only way we will score will be from a greasy goal in front of the net as the Titans goal tender was playing near perfect, but low and behold Ben Lees. The Joe Pavelski of 16u AAA hockey buries one off a rebound shot from a text-book zone entry by Trevino, Hernandez and Lees. 1-0 Nordiques with 6 minutes remaining in the game. As play went on the Titans made a massive push to put one in behind goalie Vladislav Bryzgalov, but just could not crack the code on how to do so as he shut the door for the entire 51 minutes of the game. Nords win 1-0 in great fashion giving Coach Skerlick a great win against his former squad. The boys end the weekend with a 3-2 record by playing 5 games in 4 days.